When UK-based graffiti artists Tom Deams and Sepr were commissioned to spray the new Warehouse Gym located in Al Quoz, it was a welcomed surprise not only for the artists but for the regional design community as well. Living in a largely graffiti-less region, The Warehouse Gym is an diversifying new addition to Dubai’s design make-up.

The gym, though new, has adopted the street style, decorating its walls with vivid graphics and loud illustrations that are typical of an urban city landscape.

With expressions like, “The warriors train here,” and, “Eat clean, train dirty,” sprayed along the walls in colourful, bubbled letters, the gym’s energy becomes one that is albeit harsh, yet lively.

Fahad Al Rafi, co-founder of The Warehouse Gym, explains: “Basically, my idea was to create a rough environment because the athlete builds up to their success from a natural and rough atmosphere, which is a harsh training environment… you won’t find a champion in a hotel. So I wanted to create a setting that encourages results for people. That’s why I brought in all the best equipment, street art, concrete finish, and located the gym inside a warehouse.”

The hopes of creating a new space that looked a bit damaged were soon realised through a combination of raw, unrefined aesthetics. Together Al Rafi, his brother and gym manager Kevin Teixeira transformed the space into the unconventional gym and brought in two graffiti artists, Deams and Sepr, who hail from Bristol, England.

According to Al Rafi, Bristol is the world’s leading capital for graffiti. “Banksy, who made graffiti famous and turned it into an art, comes from Bristol. So, you can fish from Bristol, in a way. Secondly I know a lot of artists who told me the best in graffiti for texts is [Deams] and Sepr for characters,” adds Al Rafi.

“I was cosy with them because on this side of the world we are not advanced in graffiti, so we need to be careful, and keep it old school graffiti. So that’s why I interfered in each design, because I don’t want to over graphitise it.”

Graffiti artist Tom Deams comments on the design: “[Al Rafi] was looking for something strong and striking almost as if the graffiti had been in the building before the gym came along, still retaining the street urban look but with that wow factor.”

In addition, Deams says: “The imagery is powerful and energetic, which works well in a gym environment. As I specialise mainly in letterform and typography, it seemed a perfect way to communicate positive and powerful slogans throughout to give the gym user an enthusiastic experience.”

The lighting in the gym also adds to the interior’s intensity. Al Rafi designed the lights with a private consultant bearing in mind the motivational and theatrical effect shadows can have on training athletes. 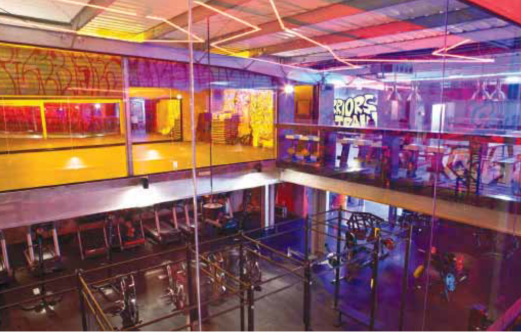 Al Rafi further explains: “[What we did is] create an environment where the energy is similar to a nightclub, which is why we also plan to bring a DJ. The lights used are LED lights and cold cathode.

We always wanted sophisticated lighting, and we ensured anti-glaring throughout the gym. We even considered shades that would be cast on the bodies. Also, we can move the light wherever we want it to shine. And it’s designed specifically to spot a shade on the body while training.”

In addition to the lighting, the brothers also installed top quality mirrors throughout, allowing those working out to fully grasp the outcome of their hard work. “The quality of mirror is the highest; you use it in five-star towers. They give the best personal image. There’s no point in spending so much money without being able to see yourself properly,” adds Al Rafi.

Complementing the graffiti illustrations and electric coloured lighting are exposed cement walls, and a fearless, raw palette that consists of dark greys and deep blacks, allowing for the wall art to really jump out and maintain impact.

Sepr and Deams have worked together in the past when they painted together in the UK for personal projects. However, the two artists still maintain distinctive styles as Deams is more inclined toward letterform and Sepr’s skill comes in the form of creative character illustration.

Though there are plenty of motivational slogans sprinkled throughout the gym, those working out can also take delight in enjoying the various large character figures that combine ideal gym ethos with a fearless urban art feel.

From the snarling dog with a spiked collar, to the figures evocative of Popeye the cartoon that distinguish male from female bathrooms, to the old man ready to ride away on a bicycle, each image is visually provocative and relates back to street culture. Every character also has a purpose, it seems. Whether it’s to entertain or to motivate, the characters are symbolic.

When discussing the large superhero-like female illustration that seems to draw athletes in, Deams explained: “I painted the female character the first time in Bristol to really test myself artistically. I guess she represents my constant struggle for perfection in my own field of graffiti, [where I’m] always working hard to better myself. She works well for the gym by representing both men and women working through the grit and determination.”

By bringing urban street art inside and keeping the cement walls exposed, The Warehouse Gym has managed to create a space that not only proudly stands alone in a city full of glitz and glamour, but that also stands as a testament to the history of modern urban culture.

When asked how it was to spray in Dubai, Deams enthusiastically explains: “We found this to be really exciting and were more inclined to push ourselves even further creatively. Graffiti is accepted more in mainstream culture nowadays with high-end fashion designers and corporate sponsors employing graffiti artists to produce work for them. The worldwide graffiti art phenomenon is so huge, so it was a pleasure to be asked to paint in Dubai where it’s new and fresh.”

The Warehouse Gym currently measures at 1,858m2. The ground floor which boasts a number of cardio machines along with weight lifting equipment is bordered by a running track. Upstairs, visitors can find a number of rooms, such as the cycling room and the multifunction room. Al Rafi though, has plans for an additional room in the works.