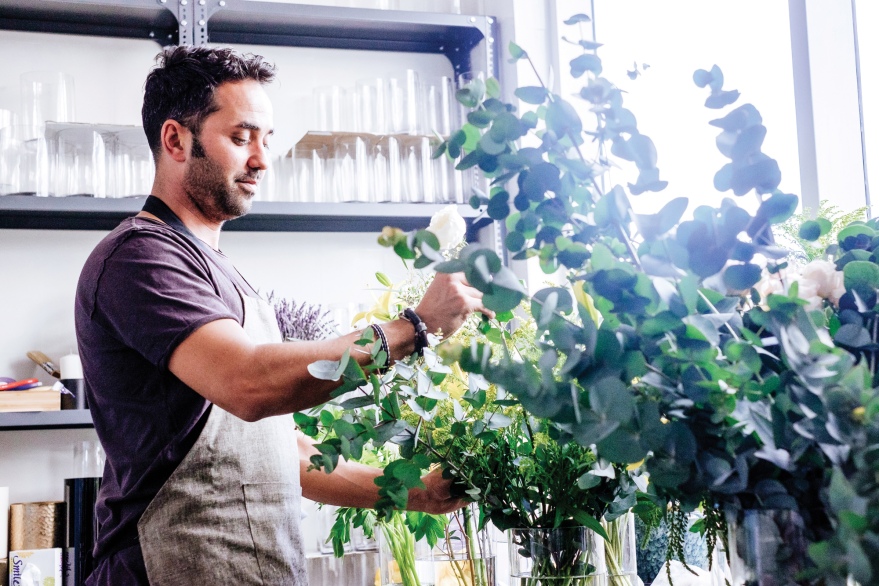 ‘Ikebana? I appreciate it,’ says Tobias Gibreel, founder of Volet, a small flower shop in Dubai’s Al Wasl locality. ‘I’ve taken influences from Ikebana, like the gentile side of it.’

It’s a warm, sunny day common for the UAE, and Gibreel is sitting on the balcony of his high-rise apartment enjoying a morning cup of coffee. Behind him, leaning against the wall, a wooden plant rack provides support for a leafy vine while a pink bougainvillea in the corner flows over the edge of the glass-panelled railing. Between sips, he checks his phone for incoming orders.

‘WhatsApp is how I start my day. Everything gets done with my phone,’ he says. ‘A lot of people come in with last minute changes – either they’ve got a photoshoot or maybe someone pulled out.’

A typical day at Volet often starts the night before, when Gibreel and his small but growing team organise the deliveries for the following morning. A debriefing led by Gibreel motivates everyone for the day ahead, and shortly thereafter, two-person teams head out to client spaces to maintain flower displays and replace them with fresh arrangements. ‘It’s a divide and conquer strategy,’ says Eric Schandel, Volet’s shop and account manager. ‘And Tobias is our guru.’

Moving to Dubai three years ago, Gibreel is somewhat of a wildflower himself, with a long, but very recent past of bouncing between cities and jobs.

Born in Germany in 1978, Gibreel grew up in Khartoum to a Sudanese father and a German mother. With two older sisters, he’s the creative opposite to his fraternal twin, Tarek, who currently works in sports retail. ‘I think we were always different,’ says Gibreel. The family left Sudan in 1995 and moved to Aachen, Germany, where Gibreel would live for two years before moving on to London at the age of 18 to study performing arts. But following a sour experience on a set, he would soon feel the path was not his to pursue.

‘I consider myself a person of colour, and I felt that there was a lot of typecasting going on in film and television. I got one part – and I’ll never forget this – but they wanted me to be a silent waiter. They told me not to say hi to the “customers”, or even nod at them, which I felt was weird. So I said, “Well why don’t I just stand here, and you can film my arm?” They fired me after that.’ 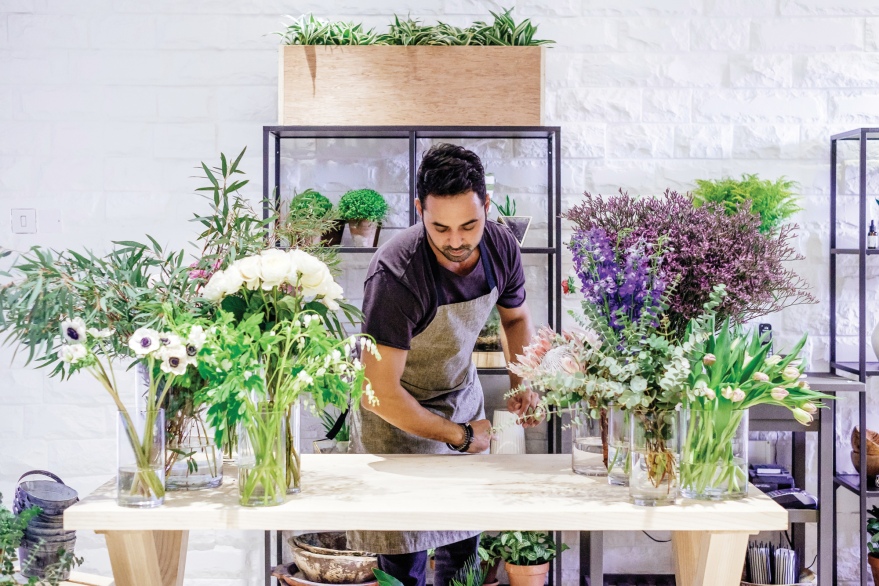 After three years of pursuing a career in acting, with a few theatre performances here and there, Gibreel would take a trip to his grandfather’s house back in Germany in 2001. He would continue moving around, following random jobs like working with an Italian distributor, which saw him relocate to Milan for nine months in 2004 (‘I also wanted to learn Italian’). His twenties was a period of ups and downs – however, since his early years in Khartoum, one thing remained a constant: Gibreel’s passion for flowers.

‘I always had a love for flowers. In Sudan, I loved plants and I think that’s why I have bougainvillea now – those are everywhere in Khartoum,’ says Gibreel. ‘Khartoum is also where I learned about the different kinds of palms and ficuses, which are more durable and good in the heat. And then, when I was 16, I would go to the flower markets in Germany and bring home arrangements for my mum’s apartment. She loved them, but they were everywhere – on the windowsill, in the bathroom.’

In 2005, he would head back to London and later, work with Hakkasan Group, an international hospitality company. When prompted about a potential move to Dubai in 2013, Gibreel readily accepted the opportunity.

Since moving to the UAE, Gibreel helped launch a number of restaurants like Inka, started a consultancy firm and, on the side, catered to his growing collection of plants and flowers.

‘I used to open concepts here in Dubai with Hakkasan, and when I did my last one, I realised there is such a big gap for flowers in the market. I couldn’t find the flowers that I wanted, and the florist I was working with wasn’t making the arrangements the way I wanted them. So I started to order the plants myself.’

Upon entering Volet, customers are welcomed by a variety that’s not often offered at other flower shops in the emirate – from peonies to fishbells. Hidden behind the quaint storefront that’s filled with ash wood desks and metal flower stands (designed by Gibreel himself), is what seems, more or less, like a florist’s dream lab.

Rectangular in shape, the back room boasts a wall that’s side-to-side windows and a long unpolished wooden table, upon which glass vases and tools are left strewn about. Cut off stems of purchased flowers cover the floors. Deciding to make an arrangement, Gibreel cleans off the table. ‘Normally, I don’t like to be watched,’ he says.

‘I prefer to be alone – just me and the flowers.’

‘Where does my mind go?’ he asks. ‘To a peaceful place, because you’re just focused on your thoughts. And you know what? People think you drift into another world, and sure there’s travel involved, but I’m also being quite critical of myself and the arrangement.’ 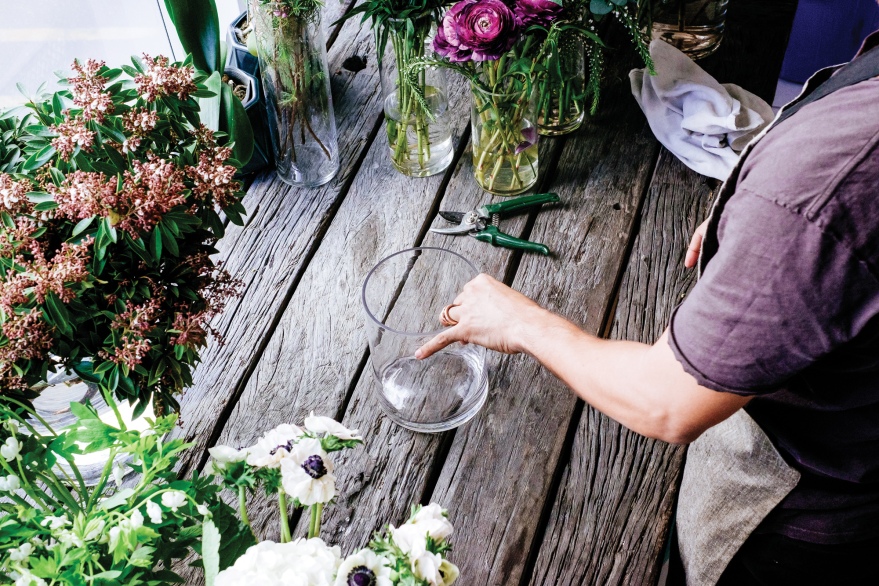 As he places yellow lilies into a glass vase, Gibreel’s body relaxes. His core caves in and his head hangs forward. He hesitates with a branch of eucalyptus. ‘The arrangement comes to life as I start,’ he says. ‘And I love designing them – it’s a form of art if you’ve done it in a certain way, and it can be quite sculptural. Each piece has its own shape, its own bend.’

Floristry is an important part of design, says Schandel. It often completes a space, and while Volet offers presentations and renderings to potential clients, Schandel insists that ‘flowers need to be experienced,’ and it’s a sentiment shared by Gibreel.

‘You’re making something that can never be made again,’ Gibreel says. ‘Sure, you can make something similar and use all the same parts, but you’re dealing with nature and nature is imperfect. Are plants a part of design? Of course – they’re a part of space.’

A year and a half old, Volet is gaining strides with more and more clients and events coming up on the team’s calendar. ‘We’re definitely looking into expanding,’ says Gibreel. ‘We’re going to play on the whole flower shop concept.’

For Gibreel’s personal life, it seems he never totally left the performing arts world behind, as he’s currently working on an original script called ‘Universal Child’. ‘It’s something that’s more real,’ he says. ‘It’s more urban and It’s who I am. I’m a waiter with an accent, but I’m also a florist.’

This article was originally published in the May/June 2016 issue of Brownbook magazine. Photo credit: Debbie Fortes.