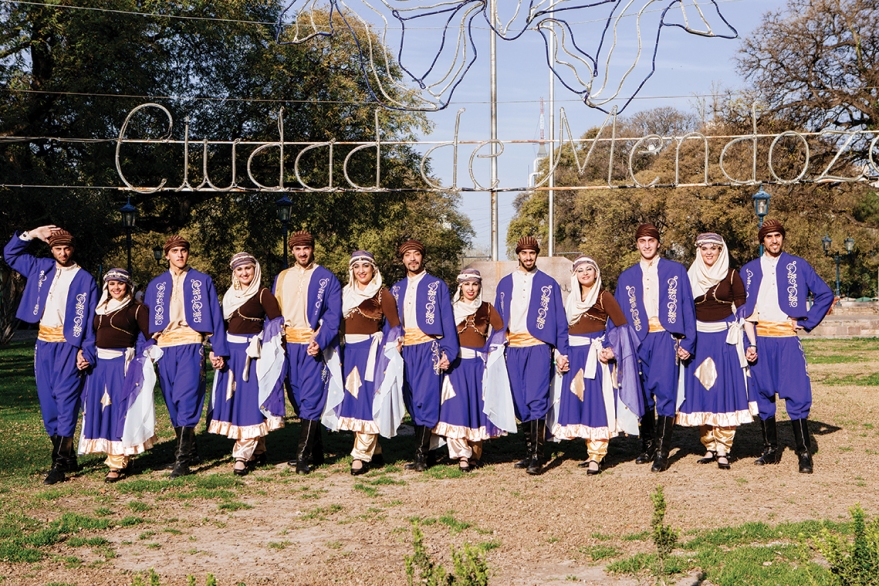 ‘We dance out of love for our Arab blood,’ says Said Hamdan, director of Ballet Al Arab, a non-profit organisation based in Argentina’s Mendoza province.

Formed in 2001, Ballet Al Arab consists of 20 male and female dancers of Syrian and Lebanese origins. Performing various folk dances from across the Middle East, one of Ballet Al Arab’s popular troupes is its Dabke de Hombres.

Dabke is one of the Middle East’s most commonly recognised dances, with its history firmly planted in Levantine countries like Lebanon, Jordan and Syria, as well as the greater region from Turkey to Iran.

Performed at various celebrations and gatherings, dabke consists of circle and line dancing and involves complex jumping and stomping. And while performances are often spontaneously formed at get-togethers, some of those living abroad dance dabke not only to stay connected to their roots, but to also educate others about the Middle East’s rich cultural history.

According to Hamdan, the ancestors of Ballet Al Arab’s members moved to Argentina over the past century, and played fundamental roles in the country’s social development and growth. With the presence of Argentina’s Arab community spreading across generations, many Middle Eastern traditions have been preserved, such as dabke. ‘Our shows always have educational objectives and bring back nice memories for Arab audiences,’ says Hamdan.

‘The men’s dabke is very similar to the Argentinian malambo,’ he adds, referring to the South American dance in which footwork consists of tap dancing, stomping and brisk switches in direction. ‘We perform different versions of men’s dabke – one from Syria, three from Lebanon and one from Palestine.’

While belly dancing is also popular among women of the Arab community in Argentina, Hamdan notes that the ‘men’s dabke is a way to show that men also dance, and with a lot of strength.’

There are a number of names for dabke, according to Anthony Shay, an associate professor of dance and cultural studies at Pomona College, California. From dola in Iran to halay in Turkey, variations of dabke are shared among Middle Eastern and North African countries. However, like most folk dances, its long history lacks exact dates and confirmed origins.

‘There are many indications that line dances that are similar to the dabke have been performed for centuries,’ says Shay. ‘Prehistoric pottery art throughout the vast region illustrates the same hand-holding. These depictions suggest that dabke, or dances like it, were traditionally only performed by men.’

It’s thought that the Palestinian dabke may have originated from old Canaanite fertility rites, which were performed in part to show appreciation for rich agriculture. Others, however, trace the tradition back a few centuries to a time when Levantine houses were made of stone, wood, straw and mud. As communities built shelter and worked to ensure the mud was compact, folk songs such as ‘Ala Dalouna’, or ‘Let’s Go and Help’, were used to keep up morale, giving way to rhythmic stomping and jumping.

Because dabke is such a widespread tradition, with variations occurring in nearly all Middle Eastern countries, the garments worn during performances typically relate to the culture from which the dancers originate. ‘The clothing most associated with dabke today is the typical baggy pants worn by Arabs and Kurds in Iraq, Lebanon, Syria and Jordan. Various shirts, sashes, vests or jackets are also worn,’ says Shay. ‘The headpieces can range, and include fezzes, kerchiefs or turbans of various cuts and colours.’

Today, women also tend to participate in dabke. For them, Shay says the clothing is quite similar – regional costumes are preferred and typically involve a long dress cut to the mid-calf or ankle. The dresses, too, are usually worn over trousers.

‘We research and understand that each costume is related to a particular geography, weather, religion or social class. For example, during a classic Lebanese dance, the costume for women includes the tantour,’ Hamdan says, referring to the cone-shaped headdress.

For Ballet Al Arab, each dance’s costume consists of five to eight pieces, and the organisation’s wardrobe stores nearly 100 different outfits used for public performances. Hamdan finds that the costumes affect the movements of the dancers, and that the choreography requires a little creativity to ensure smooth, fluid motions. ‘The choreographer needs to take into account what the dancers are wearing so that they can spin, jump and shift well. The colours of the fabrics also need to complement each other when dancers are on stage,’ he adds.

Of Ballet Al Arab’s wide array of fashion choices, the Dabke de Hombres’ royal blue and yellow costumes are perhaps the most striking – boasting Spanish influences and embroidery evocative of the costumes worn by bullfighters.

According to Hamdan, Middle Eastern tailors in Mendoza have designed 80 percent of Ballet Al Arab’s costumes. ‘We only use national fabrics that are based on original designs. The remaining 20 percent of our garments are sourced from Syria or Lebanon, brought by members of our group or transported to stores in Argentina. Our instruments, though, are always brought from abroad.’

Common regional instruments like the oud, mijwiz and the tablah, a small hand-drum, accompany the folk dance and allow musicians to provide fast, upbeat tempos. The rhythm of the music typically calls for sharp footwork. ‘The movements can be small or large,’ says Shay. ‘They usually include squats and other athletic motions. In a recent Jordanian television broadcast, dabke dancers executed intricate motions that can be compared to the footwork seen in dances from Serbia, Macedonia and even Bulgaria.’

While Ballet Al Arab continues to stage productions of Middle Eastern folk dances, it also offers Arabic language classes and plays, like its upcoming ‘Roses Garden… A Possible Love’. Centred on an interfaith love story, the play hopes to shed light on certain cultural nuances of the Middle East.

Despite Ballet Al Arab’s expansion of services it provides to its international audiences, dabke remains at the heart of the organisation. As the only Argentinian dance group that performs folk dances from different Middle Eastern countries, ‘Ballet Al Arab,’ says Hamdan, ‘keeps Arab culture alive through dabke dancing.’