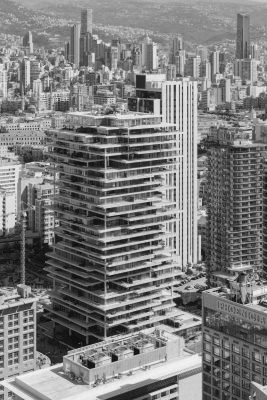 Just opposite Beirut’s landmark Phoenicia Hotel sits a residential complex by Swiss architects Herzog & de Meuron that reflects the city’s contemporary environment. Known as ‘Beirut Terraces’, the project’s jutting layers and sharp lines were informed with an awareness and respect for the city’s past, as well as its optimism for the future.

Defined by staggered floor plates and large planted terraces, Beirut Terraces is a 119m high-rise designed as part of a masterplan around the neighbouring area in hopes of rehabilitating it. The tower sits within the plan’s portion dedicated to office and residential high-rise buildings.

“The design of Beirut Terraces was quite literally influenced by the layers of the city’s rich and tumultuous history,” said the architects, who first revealed the plans for the project in 2010. “The history of Beirut could hardly be more diverse; remains of Phoenician, Roman, Mameluke, Ottoman and colonial rule have shaped the city and its buildings.”

The residential tower’s design fuses the natural environment with built elements, and aims to cultivate the city’s urban culture. Indoor and outdoor spaces merge into each other, allowing the generous terraces to become living spaces. A green boulevard, too, connects the tower to its surroundings, which is taken up by the design and continued vertically into the building.

“The project’s five main principles include layers and terraces, inside and outside, vegetation, views and privacy, light and identity,” said the architects. “The result is a vertically layered building that features slabs of varying sizes to allow for interplay between openness and privacy, and that fosters flexible living between inside and outside.”

A stone’s throw from the city’s Mediterranean coast, sea views complement the tower’s main entry – a tall, airy, open space – which boasts an expansive water feature. The interplay of architecture and nature that enlivens the terraces is therefore reiterated in the lobby, allowing it to serve as a vibrant transition between the open, public landscape and private, green residences.

The five modular floors are repeated in different combinations to create the staggered arrangement, while white slabs overhang the double-glazed walls by at least 60cm to provide shade, create terraces and reduce solar gain. And the floorplates used are thick enough to balance the daily temperature cycles by virtue of their thermal mass, which stores cold throughout the night and releases it during the day.

“Such passive strategies make the building a truly sustainable place to live in,” the architects said. “Where necessary, perforations in the overhangs modulate the lighting and exposure to the sun. Their density, shape and the shadows they generate form a striking pattern that gives the tower a distinctive identity and sets it off from its surroundings.”

Consisting of 130 apartment units spread across the 25 levels, Beirut Terraces offers two to four bedroom apartments and duplexes. Its amenities include a spa, pool, sauna and lounge, while shops and the downtown area is just a block away. Each quarter of the tower, too, has its own lobby with elevators that serve no more than two apartments at a time.

The apartments are available in different sizes and layouts due to the architectural arrangement of the building. Each apartment generally consists of three areas, including a public reception area, a private living space and a service area.

Others who worked on Beirut Terraces along with the architect team from Herzog & de Meuron, include Vladimir Djurovic Landscape Architecture, Khatib & Alami engineers and Arup.

“The city of Beirut lies in the heart of the developing Middle East,” said the architects. “Having always been a cosmopolitan city, it’s a focal point of the region as a cultural and geographical link between Europe and the Middle East.”