‘Burkina Faso has myriad, diverse mask dances,’ says Carol Thompson, curator of African art at the High Museum of Art in Atlanta, Georgia. ‘One of my favourites is the karan wemba masquerade of the Mossi people, which honours a woman who has outlived her husband.’ In Burkina Faso, the West African country bordered by Mali to the north, Niger and Benin to the east and Cote d’Ivoire and Ghana to the south, there are more than 60 different ethnicities, each with specific traditions and cultures. A common thread, however, are the exuberant mask performances that occur throughout the country.

‘The mask originally comes from the spirits of the bush,’ says Arnaud Iprex, a member of The Mask Collective, an association that organises exhibitions, conferences and workshops that diffuse mask cultures around the world.

‘Once, someone saw spirits dancing in the bush and jumped on one to get its mask. When he took the mask back to the village, it was seen as very powerful. The culture more or less starts here,’ he says, recounting Burkinabé folklore. ‘The first mask, the most sacred, was not made by men but by the spirits. After discovering it, men started to carve their own.’

According to Iprex, many religions in West Africa believe that a sole God created the universe, and while people are not in direct contact with this God, they are in contact with spirits when dressed in costume. ‘Masks,’ he says, ‘are a link between men and God.’

In Burkina Faso today there are many different types of masks, the designs of which vary from village to village. One city, for example, can have as many as two or three mask designs that contrast greatly from one to another. Usually performed by men, mask dances occur for various reasons. 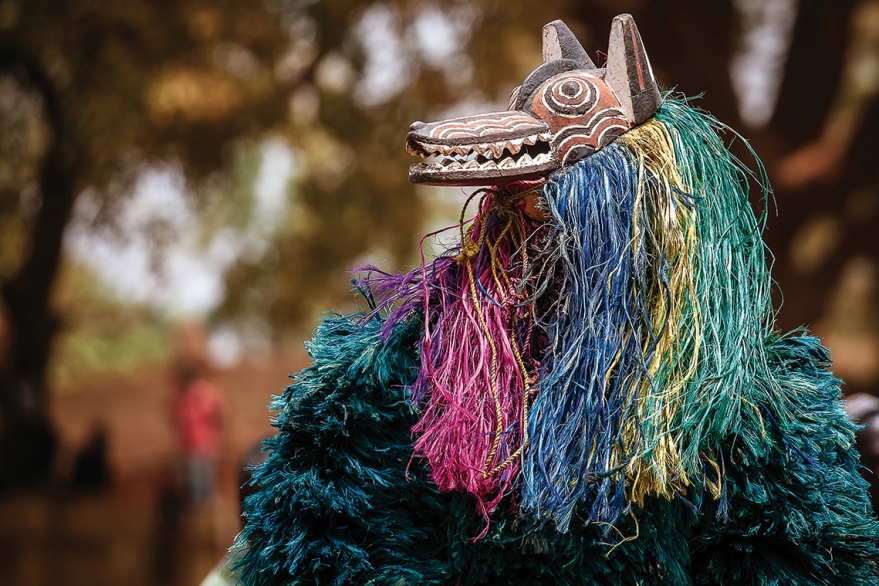 Christopher Roy, a professor of art history at the University of Iowa, explains that mask dancers perform for both entertainment purposes and serious religious ceremonies. He notes, ‘Entertaining performances are put on in the villages for events such as market days to attract customers and help the local economy. Religious performances are only organised when someone very senior and important in the village passes away. The masks are used to help send the spirit of the deceased on its way to the land of ancestors.’

In Burkina Faso’s mask societies, adds Iprex, funerals of important village members are celebrated once a year – during the dry season between March and May. Not only do the town’s specific masks emerge, but also those of its neighbouring villages. Burkinabé villages, he says, arrange their funerals one after another, allowing for maximum attendance.

Masks, specifically in Burkina Faso, can refer to either a facemask or a full-body costume. Both are typically made out of vegetable fibre, fabric or fresh leaves and are traditionally painted black, white and red – colours that were easily made from natural resources. Today, with the arrival of industrial paint, the colours of the masks reflect various palettes.

‘The masks themselves represent spirits from the wilderness that watch over both families and communities, protecting them from drought, disease, hunger and other threats,’ says Roy. ‘These spirits can appear in the form of recognisable animals or in very abstract forms because the masks in fact represent abstract ideas.’

The array of Burkinabé masks is quite expansive. Because local environments often inspire the shapes of the masks, domesticated animals such as roosters and cows, as well as wilder animals like crocodiles and hyenas, tend to take form. Masks representing the town’s inhabitants, such as local woman or elderly members of the community, can also be present at a masquerade. ‘You also have masks that are of more contemporary content, like Barack Obama or Pope Jean Paul II,’ Iprex says.

The music that accompanies mask dances is performed on various percussion instruments, balafons and flutes. Each mask, however, has its own music. ‘In most of the mask societies in Burkina Faso, the masks have a hierarchy of sacredness. Some masks are more sacred than others and can only be seen by the initiated. Others are less sacred and can be shown during public events. It’s the same with the music – usually music played for the sacred masks is also considered sacred,’ he adds.

While the different mask performances come out in Burkina Faso’s cities for various events, they also come together once a year in Dédougou during FESTIMA, or Festival International des Masques et des Arts. Held every March, FESTIMA aims to preserve and bring together the mask cultures of West Africa.

‘There are many other such performances in villages all over Burkina Faso. There is quite a large one in the country’s second largest city of Bobo-Dioulasso once every two years, for example, and there are performances in a number of villages to which the public is invited,’ says Roy.

As Roy notes, these large mask festivals invite outsiders to partake in the country’s rich cultural heritage and religious rituals. Organisations like FESTIMA are making Burkina Faso’s culture far more accessible – which is not only welcoming to tourists, but supportive of the country’s economy as well.

‘These events bring some income into the country,’ he says. ‘They also contribute to the relative prosperity of the individual villages. Such performances are very helpful and very beneficial to the community.’