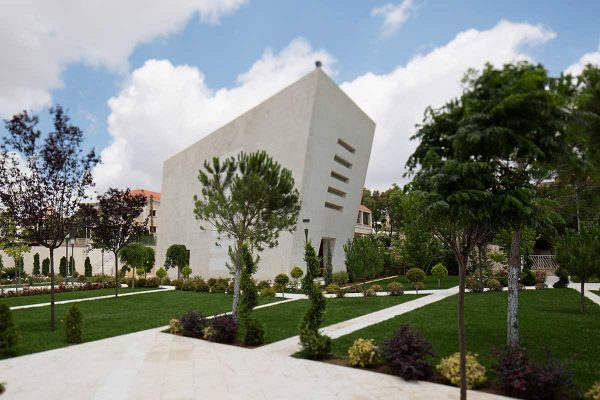 Located amidst the rolling hillscape of southern Lebanon, the Anwar Sabbah Musalla was built by local multidisciplinary design firm Polypod. The client was television and film producer Ali Sabbah, the son of Anwar, a legislator from the 1980s, who gifted the land to create a community centre. Ali’s vision was to build a place of prayer for the public, said Hani Asfour, Polypod partner and lead architect on the project. While the team originally planned to include a library on the site, the final project consists of a small prayer hall and a sanctuary in a garden, as per the community’s requests.

Clad completely in white stone, the 500m2 prayer hall is a leaning white cube – its form was derived from the Kaaba in terms of dimension and scale.

“It evokes the house of the Prophet,” said Asfour, “when Bilal used to climb up to the roof to call the faithful to prayer. For these reasons, we opted not to have a minaret in the traditional understanding of that morphology. At the Musalla, the muezzin can easily climb up to the roof, and the building leans and points in its entirety toward the Qibla. So in this way, our cube pays homage to its origins by respectfully deferring in all its dimensions – not just its plan – toward the source, the Kaaba.”

All of the Musalla’s architectural elements are multiples of three, five or seven – important numbers in Islam. For example, five bands of horizontal windows, made of translucent local marble, bring light into the main prayer hall and represent the five pillars of Islam. Polypod only used locally-sourced materials, like limestone and the marble fenestrations.

Its standout features include its minimalistic and pure appearance, as well as its leaning posture. Moving throughout the site creates different experiences – the architecture tells visitors different stories as they walk from the garden to the interior prayer hall. Every element can be traced back to traditional Islamic architecture and history, with the end point to create an intimate experience with the hall and what it offers – a serene space for reflection and spiritual connection.

“The narrow entrance evokes ancient divine architecture as the stairs lead mysteriously to the sky,” said Asfour. “The triangular promontory adorned with calligraphy and pointing the faithful to the Qibla is also an important design feature.”

The writing on the façade is from the Mafatih al-Jinan, or the Keys to Heaven – a Shi’a compilation of 29 selected surahs from the Quran. Composed using ‘sada’, a contemporary Arabic typeface, the calligraphy lists the keys as they appear in their original form. For each key, the architects placed the name and number of the corresponding surah next to it. The keys reinforce the spiritual quality of the Musalla’s experience, said Asfour, and they are meant to be seen when a visitor looks upward and sees the words against the backdrop of the sky.

“Our research indicated that there is no known or convincing explanation of the keys, as they remain one of the mysteries and beauties of the Qur’an,” said Asfour. “The other set of letters, placed vertically just opposite the entrance, are the list of 14 letters used to generate the 29 keys.”

The mosque employs passive cooling and thermal walls to minimise its impact on the environment, and engaged the local community in its construction. While Polypod handled the design, Samer Cheaito was the structural engineer, and Mohammad Yassine oversaw the construction.

Asfour added, “We hope that experiencing the Musalla bodily, spiritually and intellectually will raise enough questions and awareness about our fragile human condition and our spiritual existence to be able to better understand and elevate our spirits to get closer to the divine.”