‘I saw you in the streets and in the markets / And I saw the golden paper garland, fallen from your hair / Floating down the river’
Mesopotamia by Nabeel Yasin, 1994-1995 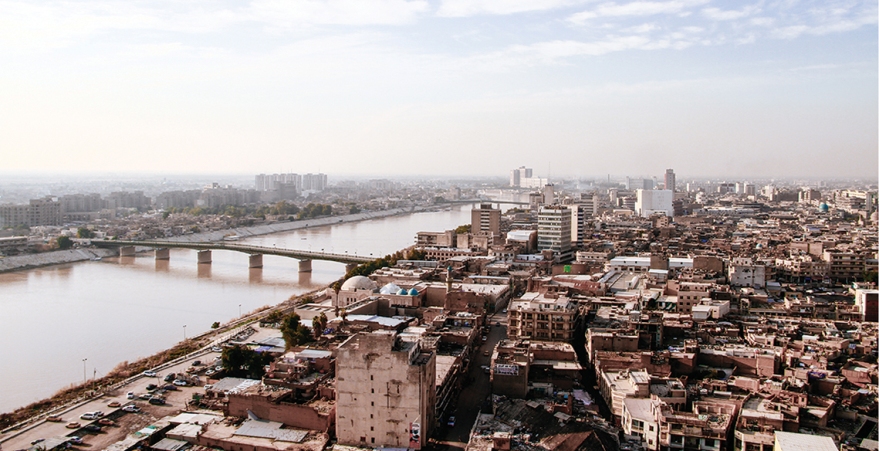 Emerging from the Taurus Mountains, the Tigris is one of the world’s most symbolic rivers. In Iraq, its waves pulsate from north to south, east to west, extending for nearly 2,000 kilometres before joining the Euphrates and emptying into the Arabian Gulf. Baghdad rests on its banks, Basra straddles the Shatt al-Arab and the marshlands feed off its cool current.

The Tigris is as literary as it is resourceful. Mentioned twice in the Bible and at least once in Sumerian mythology, the river flowed through Mesopotamia and nourished the Babylonians. Today, it underpins the way of life of modern-day Baghdad – some even argue the river is the backbone of Baghdadi culture itself.

When we began working on this issue, a number of concerns were raised. We wondered, for one, what we would find due to the current situation. Our goal has been to explore today’s Baghdad, from music to street culture to coffeehouse etiquette. We wanted to immerse ourselves in the everyday life of the capital with the hope of emerging with an honest portrayal of life outside of conflict. Fortunately, such a goal was easy to accomplish.

Throughout our research process, we spoke with various Iraqis and other visitors to Baghdad, each of whom represent the different walks of life inherent to the city. Of the countless conversations we had, whether with singers, café owners, poets or photographers, the Tigris never seemed far away. It stayed, like a protective friend, on the corner of every dialogue waiting to jump in and guide the conversation. From family picnics to Baghdad’s rowing club, its waterways are a backdrop to weekend getaways, daily athletics and a morning cup of qahwa. ‘The Tigris itself offers the poet many emotions, pictures and colours,’ says the poet Nabeel Yasin. ‘At night, if you cross the bridge, you can see the lights reflected on the river, on the water.’

The legend of the Tigris flows beyond Iraq’s borders, too. For the Iraqi diaspora, the river provides a sense of continuity – for as long as it flows, a sense of return is held. And for many living outside of the country’s borders, the idea of returning to Iraq, to Baghdad, provides endless comfort. Others, too, sense this overwhelming pull. ‘I left Iraq on July 12th, 1978… leaving behind my family who didn’t know that I intended not to return. But 25 years later, almost to the day, I did come back,’ said Azzam Alwash. It’s this constant reel of memories, whether real or imagined, that for many of us replays again and again, transporting us to the banks of our beloved river.

Over the coming pages, we honour Baghdad with a city guide that maps out its architecture, food stalls and bookshops. And as we navigate the spiralling streets that surround the many monuments, schools and restaurants, we capture a day in Baghdad, highlighting a full 24 hours from sunrise to sunset.

This issue also pays homage to the past – with letters from environmentalists and historians documenting their memories of the city. And while the past provides a cushion for storytelling, we also take a look at the ‘Brief History of the Future of Baghdad’, a focus on the city’s innovative urban planning, as seen from the 1950s.

As Yasin put it, ‘Staring at the Tigris, you can really go deeper and deeper into the past; it evokes hundreds of years.’

This article was originally published in the January/February 2016 issue of Brownbook magazine. Photo credits: Ayman al-Amiri and Ammar Shamary.