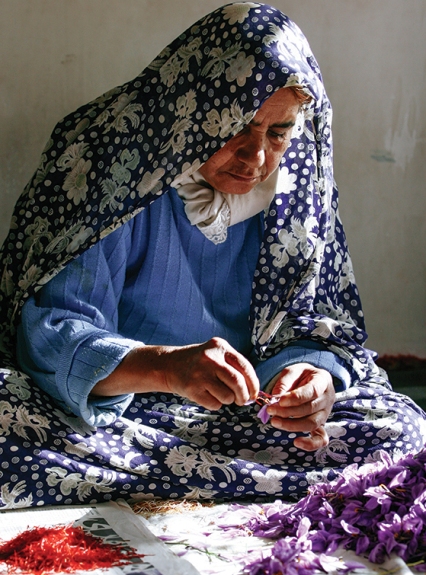 In classical Greek mythology, Crocus, a mortal man, falls in love with Simlax, a nymph, after seeing her in the woods. Though Simlax initially reciprocates the attention, she eventually grows bored with Crocus’ unwavering pursuits. Annoyed with the unwanted attention, she turns Crocus into a saffron flower, with the strained threads of red to represent his heart. Other versions of the story appear in Roman mythology too, but in each, the common trope is Crocus’ rejected love, and his transformation into the saffron crocus for all of eternity.

Today, saffron, among other goods like gold and diamonds, has maintained its value for thousands of years. Largely grown in Iran and Afghanistan, the saffron crocus typically sprouts three to four flowers per harvest. The flower is cherished for its delicate purple bulb, vibrant yellow stamen and crimson stigmas, from which the spice is produced.

Roughly 150 flowers are needed to produce just one gram of saffron, making saffron among the most expensive spices in the world (one kilogram’s worth can range between £300 to £3,000). Grown in Fars, Kerman and Khorasan, saffron is one of Iran’s key and most popular exports, providing roughly 90 percent of the world’s supply. 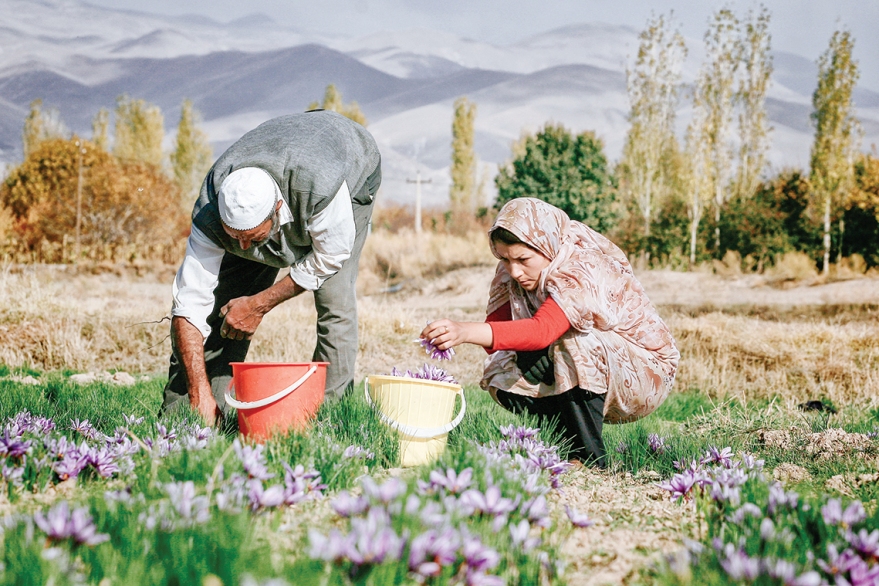 ‘The harvesting process involves considerable hand labour,’ says Subhuti Dharmananda, herbalist and founder of the Institute for Traditional Medicine and Preventive Health Care in Portland, Oregon. ‘Saffron flowers bloom during a short period of time – a few weeks – in autumn, and are collected in the early morning.’

The flowers are always picked before sunrise while the bulbs are still open. The stigmas must then be extracted on the same day, with the filaments dried later on. Saffron farmers use few tools, with much of the work done by hand.

‘Because Iran has invested heavily in the development of the crop, Iran is by far the world’s largest producer,’ adds Dharmananda. ‘Saffron is grown mostly on flat land, too, with well-drained soil and in a place where the wind is not too strong.’

While saffron is largely used for its culinary purposes, often present in Iranian and Arab dishes, like timman zaffaran, it also boasts cosmetic and medicinal properties. The red threads are applied as a herbal remedy in Tibetan medicine and recent scientific research, says Dharmananda, suggests that saffron can also be used to treat depressionand possibly Alzheimer’s.

The red stigma is also used in perfumes and dyes, with ancient Roman stories citing it as the original red carpet. Persian kings, too, were known to sprinkle it on their beds and believed its scent to have sacred properties. ‘Ancient Persians believed that the aroma of saffron was God’s perfume,’ says Najmieh Batmanglij, an Iranian chef and cookbook author. ‘The golden colour of saffron was considered royal and sacred.’ 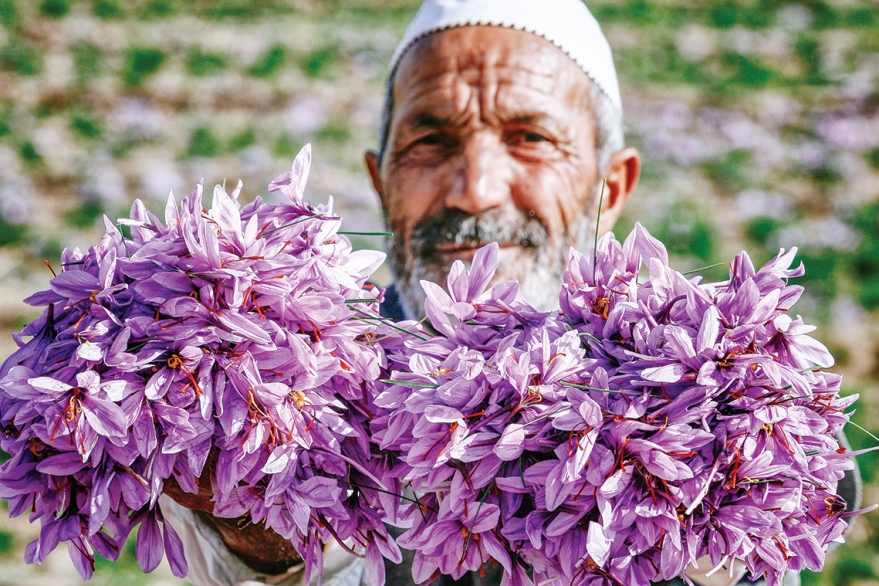 Though saffron’s uses are plentiful, its culinary applications are likely the most popular, with saffron often tinting and flavouring food from rice to ice cream. ‘I love saffron in my food, like khoresht-e bademjan, halva and, of course, saffron flavoured ice cream with cardamom and rose water – it’s heaven,’ Batmanglij adds.

While saffron is also harvested in other countries, Iran’s output is often favoured due to its rich taste and vibrant carmine hue. For Pat Willard, author of ‘Secrets of Saffron’, there isn’t much of a difference between saffron from Afghanistan, say, and Iran, but her preference still lies with the latter.

‘What I personally feel is that Iranian saffron has a much more refined taste and I equate that to its uninterrupted cultivation in the region, using corms that have a lineage to ancient times. The threads tend to be plumper, too. In my experience, it rarely has a metallic taste and its colouring is richer,’ Willard says. 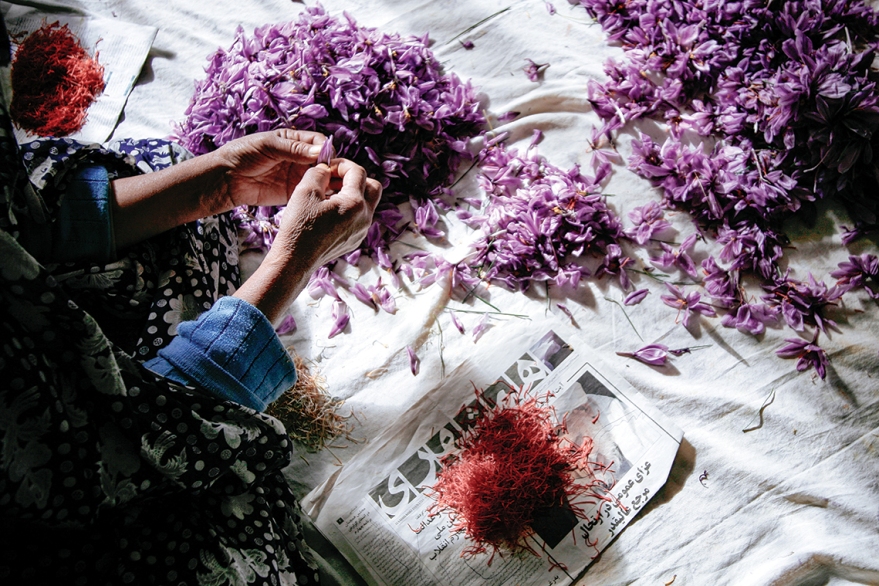 The history of saffron, however, does not only contain tales of unrequited love. The flower has often found itself tied up in wars and international politics, often serving as a source (or weapon) of conflict and hostility – such as the Saffron War during the 14th century and the more recent US sanctions. And while the spice’s reputation is as powerful as its taste, many continue to see it as a cultural entity – a link to national celebrations and childhood experiments.

‘Some of my happiest childhood memories are linked to nazri food, or the ceremonial cooking for giving alms,’ says Batmanglij. ‘On certain school days, when I arrived home in the early afternoon, I found my mother and four or five other ladies standing around a huge black pot set over a fire in the corner of our garden. Each would take turns to gently stir the food with a long copper ladle. From the aroma of saffron and rose water, I knew they were making sholeh zard – saffron rice pudding,’ she adds before reminiscing over the gossip and jokes later shared among the small group.

Willard’s book on saffron is filled with historical accounts and narratives, like surviving Mediterranean frescoes that depict women picking the flower and offering it to their goddesses. From its presence in Crete’s rich artistic culture to its inspiration of countless Greek, Roman and Iranian myths, saffron’s past is widely treasured.